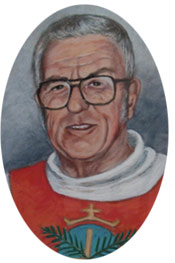 Hope Cottage was started by Fr. Joe Mills in July 1970. Fr. Mills, who was pastor of St. Patrick’s at the time, noticed a growing number of homeless people, mostly men, knocking on his door for food and assistance. There were no soup kitchens in Halifax at the time that catered to the needs of people during the weekdays. Fr. Mills called a number of women asking them to prepare a meal which they would serve to the men. 34 people showed up on the first day.

Since then, this organization has grown into an institution which is entrenched in the social fabric of Halifax. It is most probably that when Father Mills started Hope Cottage, he expected (or maybe hoped) that this would be a short term solution to a temporary problem. Now here we stand, poised to build an addition that will not only allow us to seat more people and feed them more efficiently, but we become a self-fulfilling prophecy, and can expect to be here for the long haul.

In 1751, only two years after the founding of Halifax, the Hope Cottage property was assigned to Frederick Auremberg as part of a government sponsored German and Swiss settlement in the ‘North Suburbs’. The land grant index plan for the area shows the property was originally referred as ‘Back Range Lot 8 of Block C and was assigned to Auremberg. The date and nature can be found separately in a published history of foreign Protestant settlement in the province (Bell 1961). The following passages provide a vivid image of the settlement, indicating that the property may have been cleared in 1750 and that, while too small to have been developed as a farm, it was certainly large enough for worthwhile leveling, ploughing and planting.

‘Some time before the arrival of the immigrants of 1751 several blocks of house lots were laid out in the north suburbs of Halifax and assigned to the foreign Protestants who were already arrived. The blocks stretched along the hillside from the present Gerrish Street to North Street, running back from the former Water Street to Gottingen Street that is a tract overlooking that Gorham’s Point where at last the Swiss from Alderney and Nancy had been busy clearing the surface in the late summer of 1750. By the spring of 1751 an industrious group of that size would have easily cleared the trees from a good deal more than the area covered by these lots (though eradicating the stumps and roots, and clearing the land of rocks, would be a harder task). The lots were larger than the small house lots within Halifax town plot, giving space enough for kitchen gardens.’

The dwelling that constitutes the main part of present-day Hope Cottage was not built until the first decade of the nineteenth century. The earlier Auremberg residence stood in exactly the same location ‘ at the west end of the property, immediately adjacent to Brunswick Street. Outside the town palisade at the time of its construction, it was likely a log structure built to withstand musket shot.

In 1810, the Hope Cottage property and the adjacent lot to the north was conveyed to Benjamin Gerrish Grey (a Sackville County Parish clerk) and his wife Elizabeth and John Wellner (a local tallow chandler). Later in the same year, John and his wife Anne, sold the two properties to James Kirby (merchant). Kirby later acquired others in the same town block. Together these were known as the ‘Kirby Lots’.

By 1856 Eliza Wallace was the owner of the Hope Cottage property. In that year she sold it to the Honorable William A. Black. Black was a partner in Pickford and Black shipping firm and a Member of the House of Commons. In 1862 Black sold the house to a merchant and stationer, Agustus Creighton.

Upon the death of Agustus Creighton, Elizabeth Creighton sold the property to John Rose in 1894. The property then passed to Charles Sinclair Rose and his wife Ethel who sold it in 1905 to Sarah Jane Rose. By the time another insurance plan was published in 1914, the outbuilding was gone and the addition was connected to the Home of the Guardian Angel.

The Roman Catholic Episcopal Corporation of Halifax received the Hope Cottage property in 1918, purchasing it from Sarah Jane Delaney for the cost of a single dollar (Deed 448:337)

Donations: At the door 8am to 6pm M-F. Financial at the door same time (online 24-hours)